Trip to New York City and a Few WIPs

I hope you are doing well. My boyfriend and I recently went on a five day tip to New York City. It was so fun to see the sights and eating at different restaurants. I met up with my friend who was also going to New York at the end of the week. I thought I would share some photos from our trip below and also some photos of the knitting projects I am working on will be right at the end of the photos.

There was a sculpture called the LOVE sculpture at W 55th St & 6th Avenue and people were actually lining up to get photos in front of the sign. Of course we had to get in line to get this photo too.

On our first day in New York City we took this photo while in Times Square. It was so hot that day and so busy! It was fun looking around and ducking into stores for air conditioning every so often. 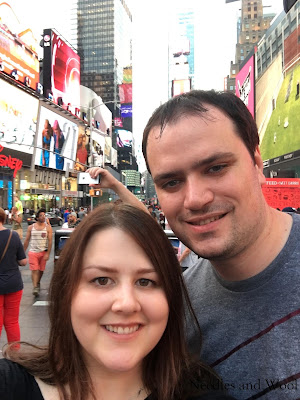 Liam and I before hopping on the ferry to go to visit the statue of Liberty and Ellis Island. 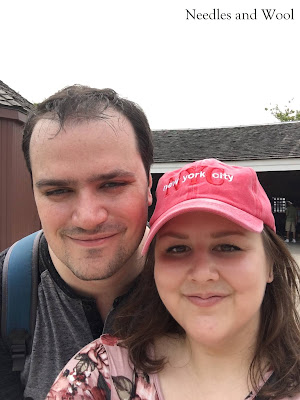 We went to a great pizza place called PN Wood Fired Pizza on 2 W 28th St. The photo I took is dark and not so great but the pizza was delicious! 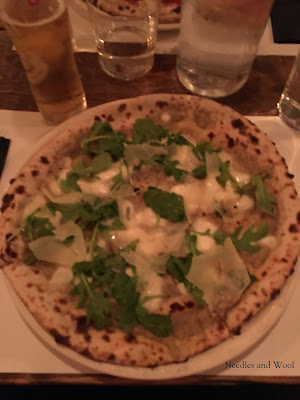 We had to visit the Statue of Liberty and I am always amazed and look up in awe every time I see her. This time we walked around the grounds with audio devices so we learned a lot about the beginnings of the statue of liberty and the impact she has had. 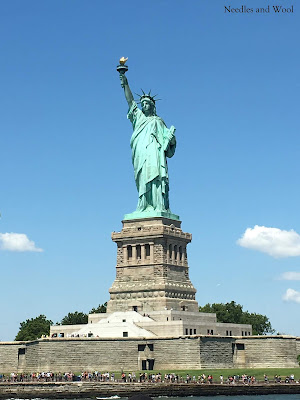 Liam and I in front of the New York City skyline. It is so beautiful and it was such a perfect day for taking the ferry and being by the water. 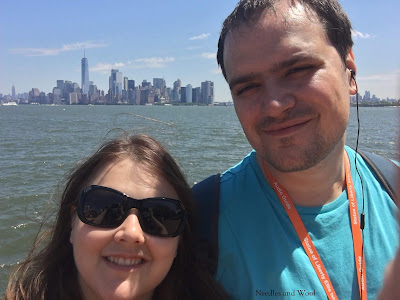 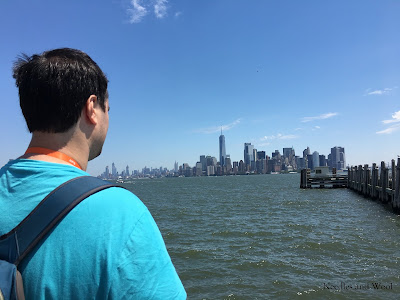 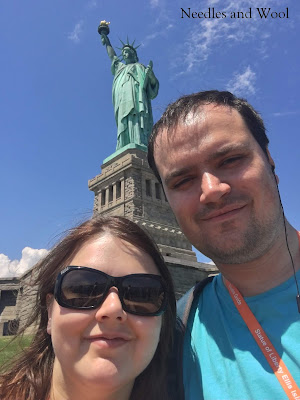 We went to pay respects to those who died on September 11th, 2001. We went to ground zero and went up to both of the fountains. I really looked at some of the names and took in the huge loss of all of those individuals who died. There were some paper flowers placed into some of the names and I read on a plaque that when it is their birthday, carnations are placed on their names to celebrate them which is so sweet. 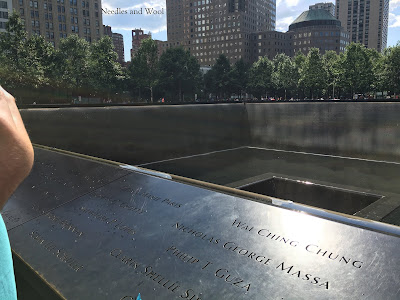 We went to the 9/11 Memorial Museum. This was a highlight to the trip for me. I really enjoyed going through the museum which was built underground and there were still some remains of the building structure intact way down there and a supportive wall to help block water from damaging the World Trade Center towers. When you are down there, you really stop and think of how many lives this affected and how surreal it all still is that this was a place where people went to work everyday and it lingered with me the rest of the day. When we took the subway back afterwards, I thought of the people who took the subway home after working at the World Trade Center everyday who are no longer with us. The photo below was my favorite artifact and has graffiti on it and photos of firemen who died. It was a remaining support beam from the wreckage. 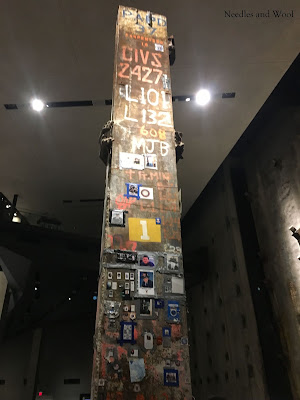 Later that night we went to meet up with my friend who was also in New York City on vacation visiting a friend. We went for dinner at Beyond Sushi on 229 E 14th St. This is a vegan sushi place. It was very good. We ordered sushi rolls and dumplings to share. 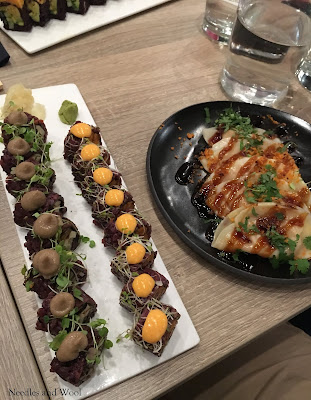 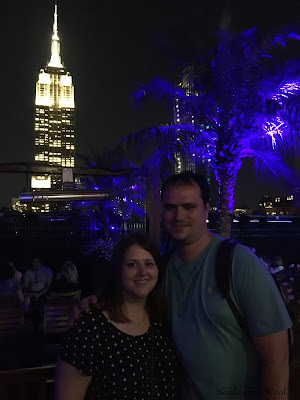 We went to Central Park on our last full day in the city and it was so nice to walk around and look at nature. 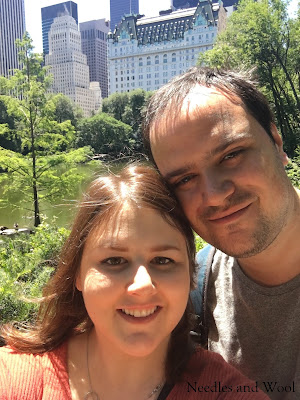 We went to the Metropolitan Museum of Art and one of the highlights was the room where they displayed fashion and gowns. This one stood out to me and so many others snapping photos of her. The dress is gorgeous and the gold headpiece was amazing and love the wings. The photo below was a wedding dress by John Galliano of the House of Dior. 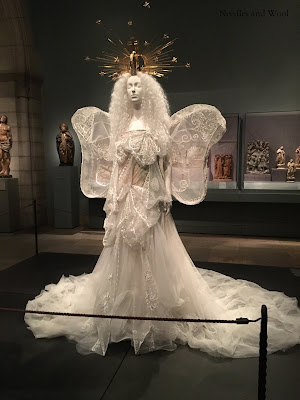 On our final day in New York, we went to the Nintendo store. I really enjoyed going there because I have always enjoyed playing Mario games growing up and today.


For my knitting, I have really been enjoying knitting the first finger-less mitten and loving how easy and fast I can knit it up. It has been perfect company for when I am binge watching The Handmaid's Tale. 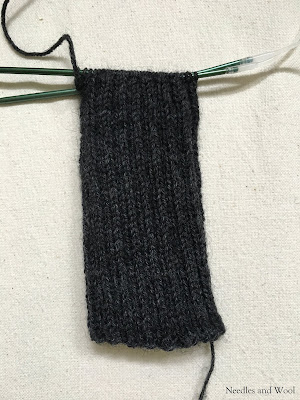 I have not worked on the decadent sock since the last post. I will be working on it more this week. 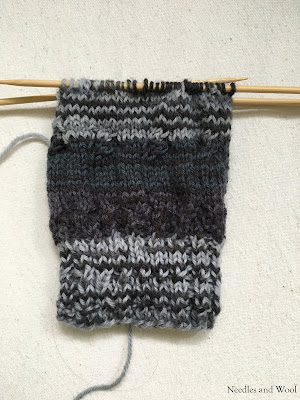 I finished knitting the two pieces of the tank top by Wool and the Gang. I have to sew the seams together to complete the top. 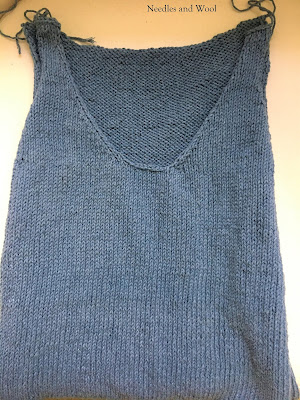 Thank you so much for stopping by today! I hope that you are all enjoying your weekend so far and have a great day!

I hope you are all doing well. This morning I finally finished the back piece of the Wool and the Gang Farrah Billie Jean top. I am happy that now I can start sewing up the shoulders and sides of the top and the tank top will be done. 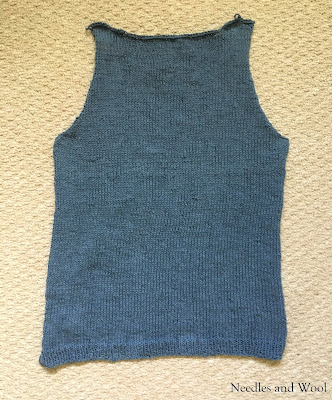 I had made more progress on the decadent socks, but sadly had to frog some of it because I was ending up with areas of loose stitches and holes and realized I needed to take it apart and start that section over. 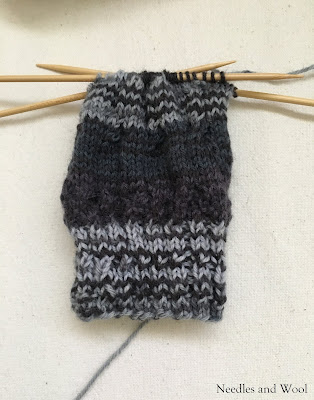 I purchased some more Patons Kroy Socks yarn in the color gray to begin knitting some fingerless mittens for Winter. I don't really want to think of colder weather right now, but I am going to be knitting some of these up now so they are ready and they are also fun to knit.I have knitted a couple pairs using Manos Uruguay yarn last winter. 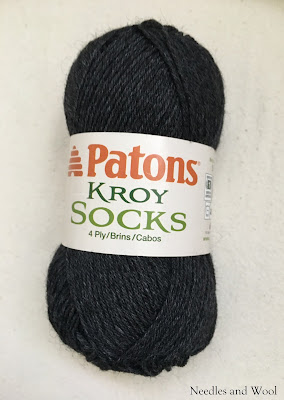 I am currently reading Introvert Power by Laurie A Helgoe. I am really enjoying this book. I am also going to be reading Uncommon Type by Tom Hanks. I purchased the book Surprise Me by Sophie Kinsella and I am so excited to read it soon, the description sounds so interesting and fascinating.

Hope you enjoy your Sunday evening and thank you for stopping by!

Have a great day

I hope you are doing well. It has finally cooled down a bit here in Toronto. Last weekend and this past week were very hot and humid. It has been nice and cool last night and today and this weather is more bearable to go for walks and hang out outside. We don't have air conditioning at our place so it is better for my boyfriend and I when it cools down.

I have been working on knitting the Decadent Socks this week. I have made quite a bit of progress. I am now at the point in the pattern where I knit rows 1 through 20 once more then I begin the heel when I am finished the repeat. So far this has been a fun pattern to knit and a bit of a challenge. There are rows where I knit right twists and cables and it was a bit fiddly with the cable needle. I am liking how the pattern is emerging and loving the self striping yarn and how it is looking with this pattern. 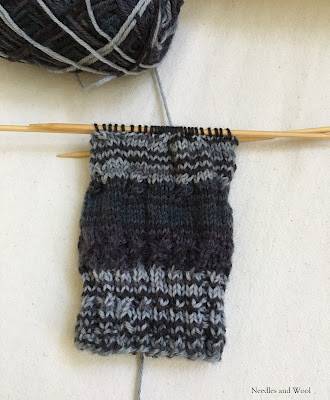 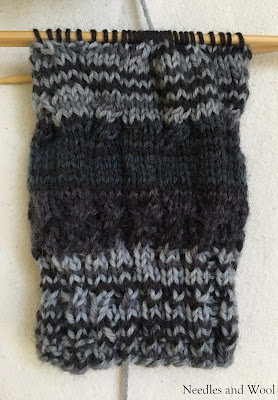 This week I have been reading Introvert Power by Laurie A Helgoe and it is as good as I have heard it is. I am also reading Uncommon Type by Tom Hanks, although it took a bit of a backseat this week. I have to read it for an online book club by the end of July. I am also listening to The Total Money Makeover by Dave Ramsey on audio book. I need to finish it this time before my loan is up at the library.

Joining Ginny's Yarn Along for July

Thank you for visiting my blog this Saturday afternoon. What have you been knitting and reading this week?

Have a great day!

Welcome to Needles and Wool! My name is Lisa, I started this blog in 2009 as a way to connect with other knitters and learn more about the craft. I am happy to say I have fulfilled both of those goals.
I am living with my husband and Kitten in a townhouse in Toronto. I love to knit, read, bake, cook, blog, take photos, be crafty, and tend to my plants. To find out more about me, please click on the "About me" link at the top of the blog under the header.
Every week, I like to post on current knitting projects I am working on, what I am cooking or baking, what I am reading, and some other updates I want to share. Please follow me through Bloglovin' (link on the side panel), Google Followers, or you can also subscribe to my blog by email in the top right corner.
Thank you for visiting my blog and have a great day!
Lisa 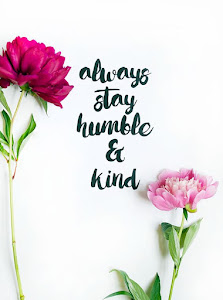